Fascism is the pursuit of governance in accordance to the truth, responsive to the world as it truly is, not as we would like it to be or pretend it to be. Yet the Enlightenment, which birthed modern Liberalism’s ideals, was itself an apparent search for the truth–embracing free will and rejecting mysticism etc. But make no mistake: skepticism is no more bound to lead us to the truth than it is simply find a truth more convenient than what we know now.

The Enlightenment was a time of great experimentation (something we need and ought to expect in the very near future), and some experiments will simply fail: Democracy and Pure Materialism (and by extension Communism) in particular. Whereas the Enlightenment would have you approach mysticism with your nose turned up and eyes glancing down, mankind has otherwise always existed in the inverse position, gazing up at the stars, at Jupiter, the Northern Lights, or Mount Olympus, meanwhile tending laboriously to the Earth beneath him. Let us fully understand the truth that God is dead, that emotion is chemical, that thoughts and memories are electrical currents in a puddle of saltwater between your ears, and that the only immortality for man is the legacy he leaves on this Earth. Now let us admit that man does no live on bread alone, that man must create God (or as many deities as it pleases you to invent), and that to govern by the Truth means to govern by the Truth of Materialism tempered by the Truth of the human animal. 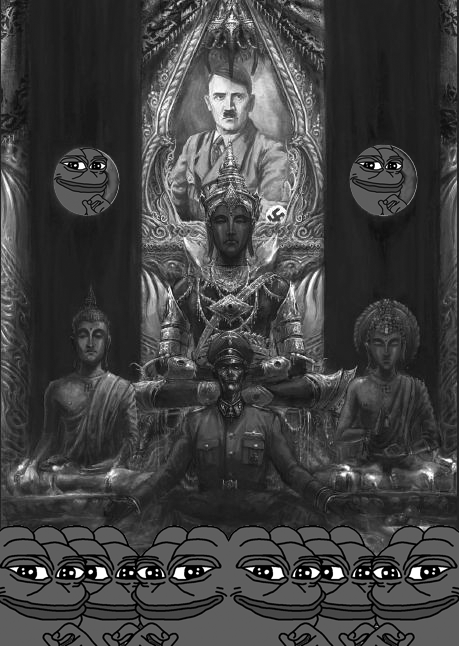 In this briefing on the esoteric, let us begin with Astrology. Set aside, just for now, the fact that modernity has trivialized and cheapened astrology to the point of irrelevance. It use to be that one couldn’t hope to be a philosopher, a scientist, a ruler, a medicinal doctor etc. without a thorough and complete knowledge of astrology. Astrology dictated the ways in which matter and energy existed in the universe–the Greeks believed all things were made up of independent, static bodies of atoms; the Chinese believed matter was in a state of constant flow; these key differences in astrological interpretations can be extrapolated upon and found at the heart of many differences (at least early on) between East and West. If you wish to read any philosophical text from the medieval era or earlier, I can assure you that much of its nuance will be lost without a thorough understanding of astrology.

Secondly comes Oracle. I use this term broadly to encompass various divining practices: Tarot, Runes Spreads, Oracle Bones, Entrails Readings. Again, as good materialists we all agree that there is no magic to any of this. However these practices are steeped in interpretation of human nature. Especially in the cases of tarot and rune readings, the various symbols and icons are all meant to represent archetypes of human nature; they cannot predict the future, but instead may give you new ideas for tackling current and future problems. It is human to go about thinking of something one way, continuously; oracles act as suggestions to interpreting things in a different way, bridging the gaps between ideas in our minds. This is akin to praying in more contemporary religions–opening one’s mind–and it comes as little surprise that reading verses of holy text at random and meditating on them is so popular.

And thirdly is Conduit. This is the attachment of divinity to the physical world. This differs from oracles and divining, as such practices are more akin to channeling a perceived, spiritual knowledge into inspiration. This is quite apparent in pagan religions–those that have failed because they lacked the institution of invasive, dominant faiths–in that spirits and deities are often said to inhabit physical locations like rivers and forests, as well as preside over human practices like traveling, hunting, etc. In Christianity, there are not only churches and reliquaries devoted to saints, but Christ himself is thought of as a god in the flesh. Muslims hang on the words of Mohamed, conduit of Allah, and Jews see themselves as the chosen people of Yahweh, a fertility idol in primitive cultures. I will say this: institution has splintered Christianity and Islam a thousand times over; paganism has remained wholly unwavering, and that is because it does not direct human nature, but rather reflects it. This is why oracle is much more apparent and spiritual in pagan practice than in institutional practice, though Christianity has also become married to pagan practices over the years in Europe.

As we move towards the Truth, the institution of religion becomes unimportant, as it seeks to interpret the truth which we have already disproved. The spiritual practice is what remains important in acknowledging the truth of human nature, which institution denies. To bind communities and build kinship, communities need not all believe in one religion, they need only practice it. In Japan, it is clear that virtually no one believes in Shintoism. Yet millions of their people celebrate Shinto festivals, visit and pray at shrines, study the mythology and legends, etc. They do so because they are Japanese. The debate in the west now is whether or not we be Christians or pagans, while believing neither, generally. Christianity is not White, but it is full of pagan rituals and such; it is also much more integral to the history of our race (not to discount the lore and epics of our old gods). I believe there are regions of Europe that will emerge as pagan–Ireland and Scandinavia are steeped in such a direction, Eastern Europe would be too if Eastern Orthodoxy had not grown so popular. But in either case, the emergence of White identities once again shall lead the charge.

Fascism necessarily lends itself to esoteric occultism. Even as a materialist I have found myself unable to break free from the orbit of the occult. In seeking the truth, we learn of the necessity of lies. Astrology dictates both Matter and Spirit, Oracle teaches both Divine Knowledge and the Self, Conduit reaffirms the link between the Mundane and the Heavens, and just so: mankind is both God and Animal.

One thought on “The Esoteric Truth”